"David Eli Grimes" getting a positive response from Rock and Roll Hall of Fame!!

Eclipse was pleased to have Eli Grimes back in the Studio yesterday, his many upcoming projects are really picking up speed.

Eli came in yesterday to record "Rock and Roll Backwards", The idea for this song came about at a football game, he noticed the song "R & R Train", and only because he suffers from dyslexia, could he find it so interesting, to think of this song "Rock & Roll Backwards"

Eli has been writing songs for 25 years, and has worked with many other musicians, including the very talented, Kurt Johnston. 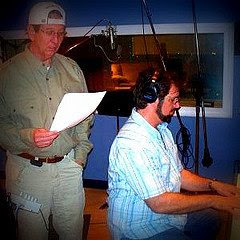 He also has recorded memorable others including,
-"Does Anybody Kare?"
-"Zip Code to Heaven"
-"The Homeless Dance"

Jim Stafford, owner and engineer of Eclipse has only great things to say about Mr. Grimes, adding that "Eli is positive, unselfish, and always creating for a cause."

Eli has been a part of other organizations such as, Big Brother, and also

sang his song "A little girl is missing" for the parents of Haleigh Cummings. (Check out the Video on YouTube, by Clicking on the link below!